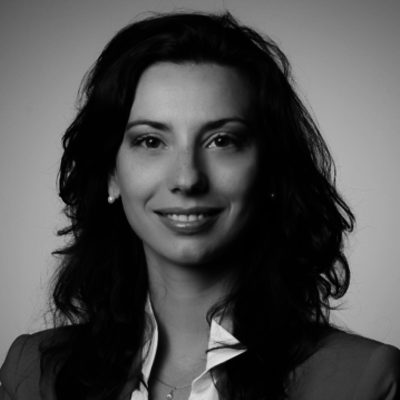 Giovanna was born in Brazil from an Italian, German and Portuguese family. She has been living in Europe since 2002.
Giovanna graduated in Law from Castille-La Mancha University and also holds Master Degree in Corporate Law from Pontificia Comillas University.
Before founding GP GIRARDI, Giovanna worked for several years in a well-recognised Spanish IP Boutique, where she gained invaluable experience in dealing with all aspects of contentious and non-contentious matters in the field of intellectual property law.
Giovanna is fluent in English, Italian, Portuguese and Spanish, with a good understanding of French. In her free time she enjoys reading, learning, cooking, running and travelling but more than anything, she loves walking in the hills behind her home with Lori, her beautiful White Swiss Shepherd dog.

Founding Partner
GP Girardi
March 2014 – Present (1 year 8 months)Madrid area, spain
I specialise in the legal and strategic aspects of intellectual property, especially managing the preparation, filing and prosecution of patents, trademarks and industrial designs. I have vast experience in counselling clients in trademark clearance, infringements, enforcement and IP due diligence, as well as in litigation, negotiation and drafting of co-existence, licensing and intangible assets sale contracts.

IP Lawyer
Lerroux & Fernandez-Pacheco
June 2009 – January 2014 (4 years 8 months)
Working at Lerroux, a small IP Boutique, has given me a broad range of experience in
dealing with contentious and non-contentious matters in the field of intellectual property
law. My work includes advising and acting for clients in relation to trade mark oppositions
and invalidity proceedings, trade mark clearance and infringement matters. I also have experience in carrying out and overseeing due diligence exercises, advising on assignments and licensing arrangements and drafting and negotiating agreements.