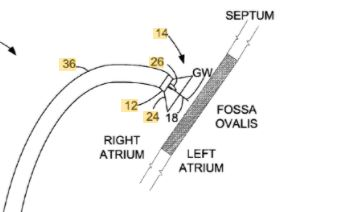 Official title and information are available only for Plus and Premium subscribers.

Patent Granted Systems, devices, and methods are provided for transseptal access of septa within a patient. The device can be advanced to a septum, e.g., towards a fossa ovalis. Instead of applying positive pressure to “tent” the septum, potentially causing dangerous overshoots, a negative pressure is applied to a lumen within a sheath, e.g., within an elongated member slidable within the sheath, via a negative pressure source such as a syringe on the proximal end of the sheath. This results in the septum pulling inward. The sheath employs a stationary needle-like central core component contained within the lumen of the sheath that punctures the septum when the same is pulled passed it by the negative pressure. The stationary needle-like central core component may be hollow and may form a portion of the elongated member or may be coupled to a distal end thereof. The needle may also be controllably moved such as by a governor. Certain patents are generally directed to transseptal access, with certain broadening aspects. Certain CIP patents and accompanying continuation application have multiple broadening aspects, and are claim-mine-able to encompass multiple types of tissue fixation, including for embolectomy, valve repair, and so on. The PGPs and patents have been used in multiple rejections in patent applications pursued by companies including: Boston Scientific Edwards Lifesciences Terumo East End Medical Bioventrix

MAKE AN OFFER
GET LICENSE BROKER APPLY submit an inquiry