Zeitgeist of June 2016: Interview with Alan Greenspan right after the Brexit 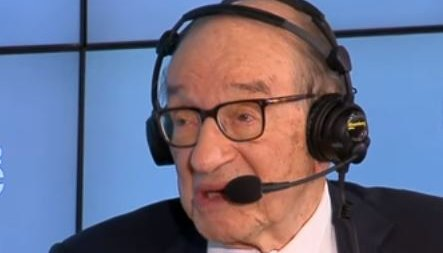 For those who are interested in national economics, this interview is a must see.

Below is a transcript which I have provided that shows selected parts of the interview, for easier access.

The EU and the Euro

“The EU is a very good idea, but the problem with the Euro is that there is no backup for the European Central Bank. Theoretically, the Maastricht treaty has got means by which they would be financed if they got into trouble, but that’s not gonna work.”

“Tony Blair and Gordon Brown made some very tough decisions, and I don’t see anybody to match them.“

“Productivity growth of more than two thirds of the OECD countries is running at less than half a percent per year, for five years. That means that incomes are stagnating. And what that is doing is creating a general stagnation in the developed countries, which is causing desperation on a broad of the electorate.”

“Usually the problem which you have is that you have only two choices: one, flood the particular problem with reserve balances, or two, you allow the currencies to float. The first is obviously a desirable one if it works, but it’s a risky one, and you are always better off to allow the markets to run that course. In other words, free up the currencies, free up very much the actions which allow the prices to move. If you are going to stop prices, you create huge problems. And that has always been my view what should be done.”

In regards to cheating with Exchange Rates

“Distorting a currency for the purpose of achieving stabilization is a loser’s game. And as sooner as you get adjusted a currency to the market place, then you get the positive forces that people say: ‘My God, it’s gone too far on the down side. Let’s come in on it.’ That’s what you need. What you need now is all over sudden the Pound to be undervalued.”

Pertaining to Switzerland, which is presently facing a Tsunami of money fleeing the Euro zone

“The problem is what they are ending up with these severe negative interest rates. And what’s fascinating is the extent to which nobody can get enough Swiss Francs. There are not enough Swiss Francs out there to meet the demand, so what you are getting is that the Swiss are charging for holding their currency."

With respect to the Brexit

“It’s just a matter of time before Scotland gets another referendum, because it wants to make it a lot easier to stay in the EU zone, as the chose to do, if in fact they don’t have to take too many actions. Freeing themselves from the UK before the Article 50 takes hold would make it easier for them to stay there. I think that we are going to get very soon a significant renewal of the referendum on Scotland and I am almost certain that it’s gonna pass.”

What will be occuring to the Euro?

“I think the vulnerable institution right now is the Euro zone. Because as I said before, there is no backup to the ECB yet. The European Central Bank assets which had gone up to a high level and back down, has now come up all the way up to the high where they were. That raises a serious question: what happens if all of a sudden the Euro seizes to be a hard currency? It happens overnight. They will be in very significant difficulties, as far as I can see. And I think the thing to do is what they should have been doing a long time ago: get Greece out. Because they are a toxic liability sitting in the middle of a very important economic zone.”

Must the Euro zone change?

“It absolutely needs re-adjustment. The Euro zone cannot go on structurally the way it’s put together. Now it’s fundamentally the northern states of the Euro zone funding the southern states. And the result of that is that we have an unstable system which cannot go on indefinitely. You need … if you put two currencies together, you have to have a similar culture. You cannot differential cultures. Now the argument I used to get is that when the Euro comes in, the Italians would behave like Germans. They never did from day 1.”

About the worldwide underlying problem currently

“The problems that we have, as I mentioned before. It’s often useful to start with the end result and go back, in reverse. What we see is the desperate population out there. Everywhere. We’re seeing it in the United States, you can see all during election period. It’s a fear, it’s a desperation. They are looking for somebody that come and help them out. That’s basically what Brexit has been all about. We’re seeing it in Europe. Generally. So the question is: why?  Nobody wishes to discuss this because it’s politically very difficult to discuss because nobody knows what to do about it. In the United States which is – not by itself, by any means – in fact, the US it’ best to talk about because our data system is better. But what I am about to tell you exists pretty much throughout the developed world. And that is that as the populations age, and they all are now in their Baby Boom period, and they are going into retirement, that is creating a major physical problem in all of these countries. And the issue is essential the entitlements. Entitlements are legal issues, they have nothing to do with economics. If you reach a certain age or if you are ill or something about an age, you are entitled to certain expenditure out of the budget. Without any reference how that’s gonna be funded. Where the productivity levels are now, we are lucky to get something even close to two percent annual growth rate. And that annual growth rate is not adequate to finance the existing.”

On whether the policy maker be able to adjust productivity higher

“No. Well they can, indirectly. If they were to slow down the rate of entitlements and enabled … Remember at what’s happening, which is a remarkable statistic. For the United States, the sum of gross domestic savings plus the entitlements, as a percent of GDP, is flat. For a half century. That means that basically for every Dollar of entitlement crowds out one Dollar of domestic gross savings. The gross savings adjusted for the current account balance is what the gross domestic investment is.”

Then, there is a discussion pertaining to a crisis and how to use this crisis for handling this issue.

Outlook for the American economy

“The fundamental issue is that the fact that productivity growth is ground to a halt. We’re running out of people. And that everyone was very pleased that the employment rate was rising. Well, statistics tell us that we need more and more people to produce less and less. And that is not a prescription for a viable political system. And so, what we have at this stage is stagnation. And don’t think that there is anything out there which suggests there is recession. But I don’t know that. What I do know is that the money supply M2, which has always been a critical indicator of inflation, is for the first time going up remarkably steadily six, seven percent. Almost a straight line. It’s tilted up in the last several months. It’s added a percentage point or two. That thing that we should be worrying about right now, which we have actually given no thought to it is that this tight economic environment ends in inflation. Historically, fired money has always ended up that way. All what I am saying is: ‘I don’t know when it’s coming. When you look at human history, there are times and times again when we thought that there was no inflation and everything was just going fine. And I just basically say: ‘wait!’. This is not the way this thing ordinarily comes out. I don’t know, I cannot say as I read it on the horizon. In fact, commodity prices are soggy. The oil price has been a terrific impass, had a terrific impact on global inflation. It’s not about to emerge, but, I would I would not be surprised to see the next unexpected move being on the inflation side. You don’t have inflation now, and you don’t have it until it happens.”

In regards to negative interest rates

"Let’s understand where negative interest rates come from. If you go back and look at the period when your ten-year note was five percent or thereabouts, or when the normal relationships existed, negative rates would not exist. But if you take for example, one day emerge, you have a five, ten years ago, the Swiss frank, I should say the yield on Swiss long-term debt, would be two-, three-four hundred basis points or less desirable. And that spread would move up and down. It hasn’t broken. What happened is, if the overall rate comes down, then in order to keep that spread, the Swiss frank has to go negative. So what you have is that they are going to stock up on currency.”